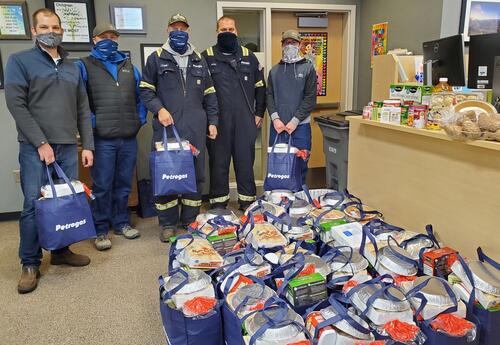 Every year the Ferndale School District Student Services Department works to provide a variety of services, programs, and resources to meet the needs of students. This past year, as we have faced new challenges resulting from the pandemic, our services and support have been more important than ever -- and we are more grateful than ever for our community partners, whose donations of time, products, and dollars have made such an incredible impact. 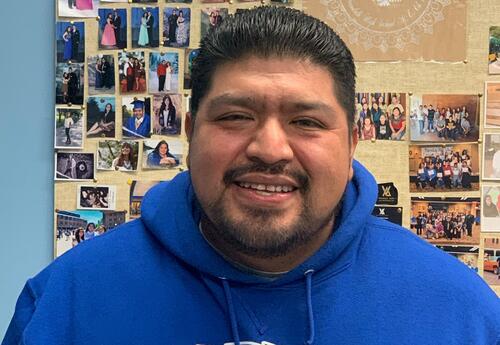 We are extremely pleased to announce that Ferndale School District’s teacher/leader Alvaro Vicente has been chosen as a 2020 Ken Gass Community Builders Award recipient. 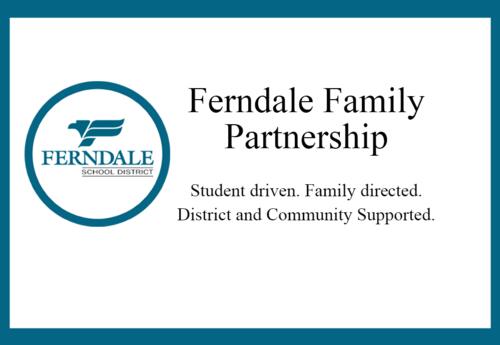 The Ferndale School District is excited to announce that beginning January 2021, we will be providing a service to our families who choose home-based learning for their children and who are seeking a partnership to support the education of their children. Our Ferndale Family Partnership is a collaboration between the Ferndale School District and families to provide academic support for those students whose families choose to engage in home-based learning. 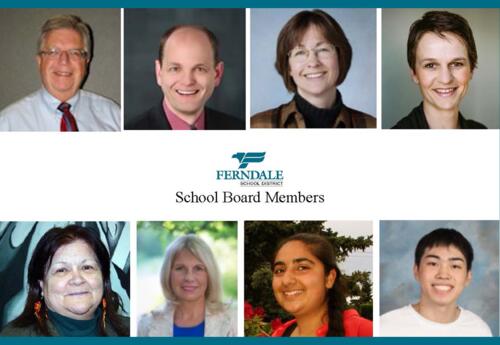 Ferndale School Board Honored as 2020 Board of Distinction

The Washington State School Directors’ Association (WSSDA) has recognized the Ferndale School Board as a 2020 Board of Distinction, marking the eighth time the board has earned the honor since 2012. 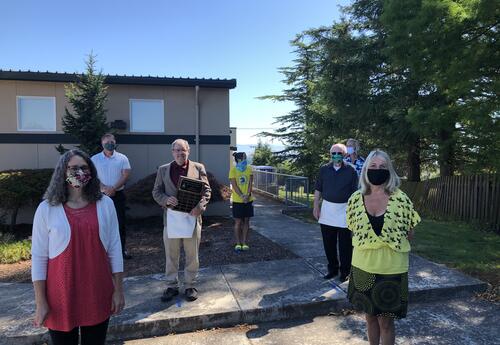 Ferndale School District Superintendent Linda Quinn was on hand with a tribute that included, “It is my honor to be here to celebrate the 2020 Masonic Teacher of the Year: Laurie Bianco. Laurie is a phenomenal music teacher at Skyline Elementary and an advocate for music education in our area and across the state. She is frequently asked to be a guest presenter at regional music education conferences. It is not surprising that this past fall, she was selected by the San Juan Region as their 2020 Music Educator of the Year.” 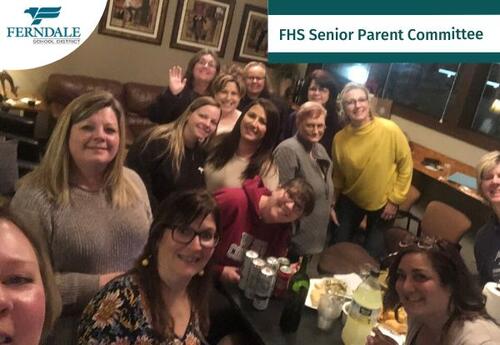 Families of Graduating Seniors Send Thanks to Supportive Community

When schools closed in March all students, Kindergarteners and seniors alike, shifted to a remote learning experience that required connection with teachers and classmates in a different way. For seniors, the last few months have also meant adjusting expectations and reinventing traditions meant to honor the high school graduation milestone. 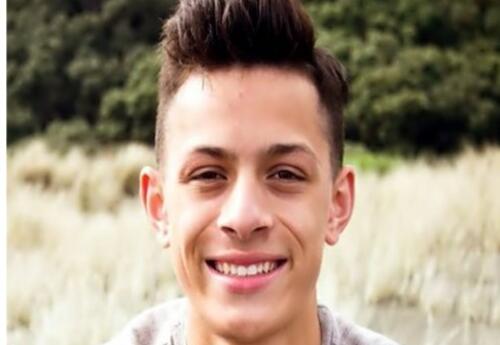 A senior class tradition at Ferndale High School is posting a countdown calendar in the student lounge when there are just 30 days of school left before commencement, and then ceremoniously crossing off the days one at a time. Like many senior class traditions, this one was hijacked by Covid-19 when school buildings across the state were abruptly closed. 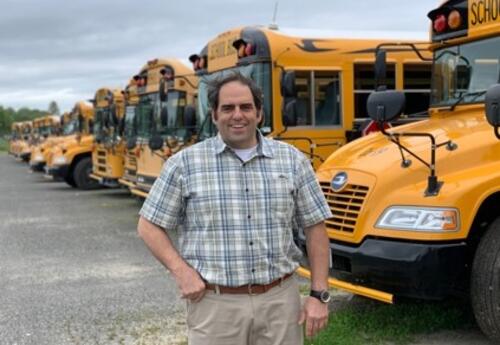 Guiding teams through challenging terrain with unexpected turns and twists for nearly three decades has prepared Paul to ensure our transportation services are executing the best possible actions to support students and their current distance learning needs. Paul is quick to point out that it’s all about TEAM, and he says he has a great one in Ferndale. 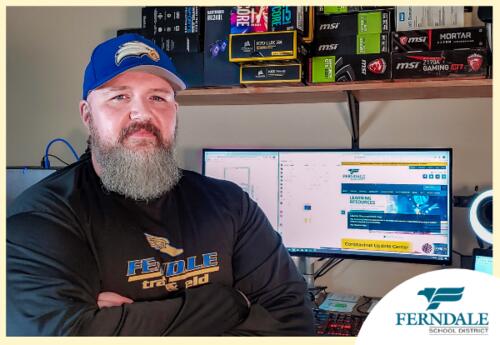 As we continue to move through this new reality, we predict technology is going to continue to play a critical role in our students’ learning. Our 1:1 technology model at the secondary level, our elementary computer labs and Chromebook carts, and our Teaching & Learning Tech Team members have been funded with local levy dollars. 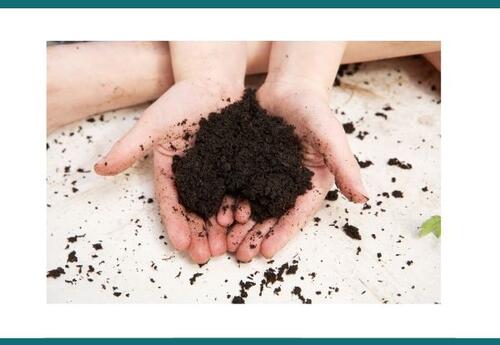 Kicking off the 2019-20 school year with 700 of our Ferndale staff in the same place at the same time was designed to unify all of our district employees and allow all members of our team to hear and experience the mission of our district, together. At the heart of the kick-off of the 2019-20 school year, which admittedly feels like a very long time ago, was the overarching theme: “FerndaleCARES”. The premise of FerndaleCARES has been the guide that has kept us focused on our true north for many years. We know that students don’t want to learn from someone they don’t like. As James Comer, famous child psychologist, once said, “no significant learning can occur without a significant relationship”. Rather, it’s the result of human relationships and individual connections. 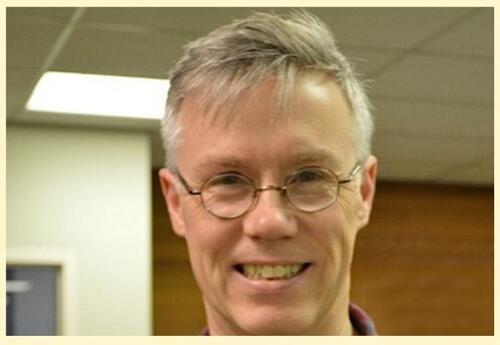 For Scott Morrow, teaching may have been in his blood. Both parents were in education and his summers growing up were spent working at summer camps and teaching swimming lessons at the YMCA – experiences that gave him an important insight into what became his vocation. 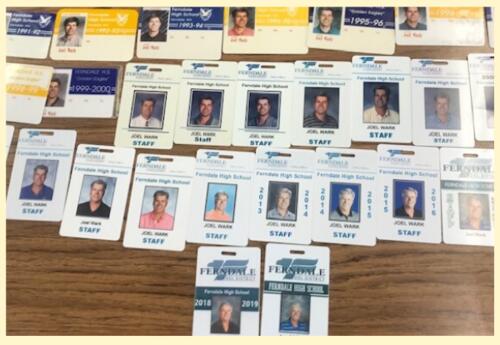 For Ferndale High School math teacher Joel Wark, teaching has always been about coming alongside students as a partner in learning. “I have been tutoring kids in math since I was in the sixth grade. I found it satisfying to be able to make a difficult subject a bit easier for others. When my team sport days came to an end, I enjoyed coaching a variety of sports and working with gifted athletes. This is when teaching and coaching called clearly to me as a career.” As a classroom teacher, Wark’s coaching persona shines through. 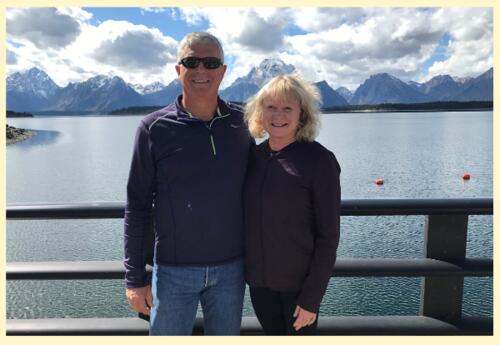 A Dedication to Inspire Lifelong Learning: Kim Cowan Retires After a Career Spent Sharing the World of Reading with Students

Kim Cowan recalls a formative experience when she was a second grade student and a wonderful teacher made her feel valued, capable and inspired to learn. That teacher made a lasting impression. She not only set Cowan on a path as a lifelong learner, but she also prompted her decision to become a teacher herself. 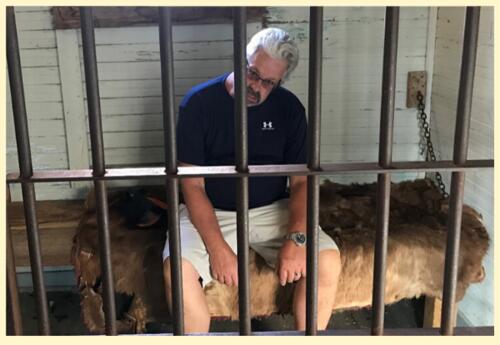 Lex Maxwell’s career story did not begin with the classroom in mind. His chance to impact student lives came after a pivot in his own life. Les spent the early part of his career managing Sears Auto Center – a job that, after twenty-years, he knew he wanted to transition out of. His search led him to the book, “What Color is My Parachute?” From there, he began a formal journey to find out what was next. Les found himself in a college level science classroom where he says, “I took a chemistry class and the instructor was so animated and made the class so much fun, I thought, “Hey, I could do this.” And so…he did. 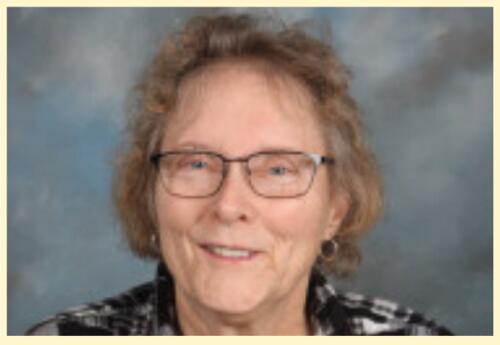 Ferndale Teacher Cheryl Frazier Readies for Her Next Adventure

Cheryl Frazier, who has for three decades taught elementary-aged students to read in the Ferndale School District and been a driving force behind the local Math Olympiad competition, never imagined as a child she would grow up to become an educator and instead came to the profession a bit later. 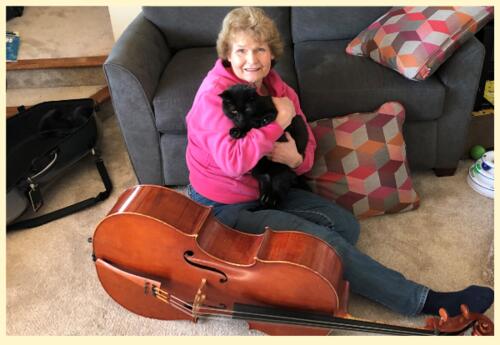 Esteemed Ferndale Music Teacher Reflects and Looks to the Future

Bette Ann Schwede earned teaching credentials from the University of Michigan but her training and love of music started when she was a child. “I love music and playing cello. I helped my mother, a music teacher, starting when I was in middle school. When home from college I taught some of her classes, with the principal’s approval, of course.” She began her own teaching career after earning both a Bachelor of Music with Distinction and a Master of Music Degree. She has been teaching in the Ferndale School District for twenty-three years. 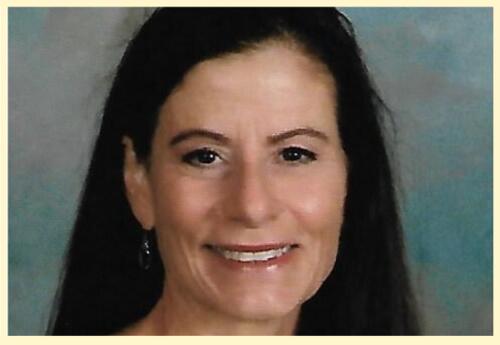 The year was 1984. The Apple Macintosh had just been unveiled, and that spring, Laura Scalzo graduated from Western Washington University with a teaching degree in Special Education and General Education. At that time, few could have anticipated that, 36 years and one COVID-19 pandemic later, Scalzo would complete the final months of her career reliant upon technology to educate her students. 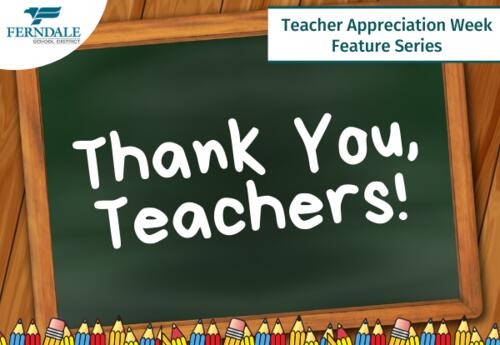 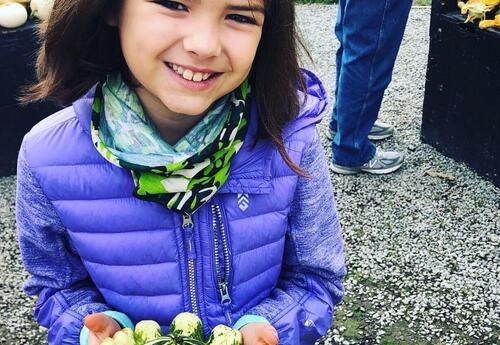 You only turn ten once and now ten-year-old Avery was poised to spend her tenth-birthday celebrating with friends. Her mother, Ferndale High School English teacher Misty Rainwater said, “We had a celebration planned which, unfortunately, was cancelled because of the COVID-19 shutdown. We sat down as a family and thought about Plan B.” 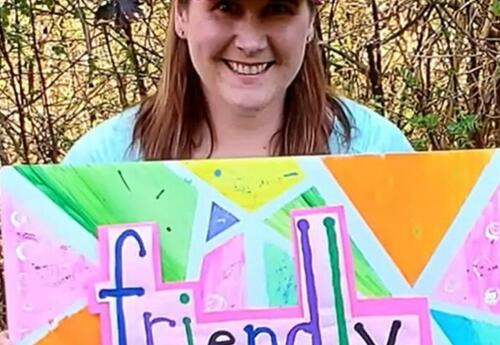 Videos Remind Students They are Loved and Missed

With school buildings closed and in-person learning canceled to stem the spread of the coronavirus, our staff members have been working hard to figure out how to educate students in new ways. They are finding themselves just as busy as ever preparing lessons and taking care of students’ needs. However, they are also missing the part of being educators they love most -- the daily social interactions with their students. A learning plan sent via the internet or U.S. Mail just can’t convey the relationships they have built with their kids. 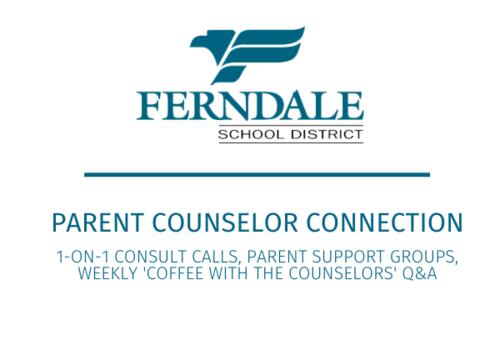 Register to sign up for the special program offering 1-on-1 consultation, parent support groups and open Zoom meetings. One component of the program, a weekly Coffee with the Counselors offering, is held on Wednesdays at 3 pm and 7 pm. 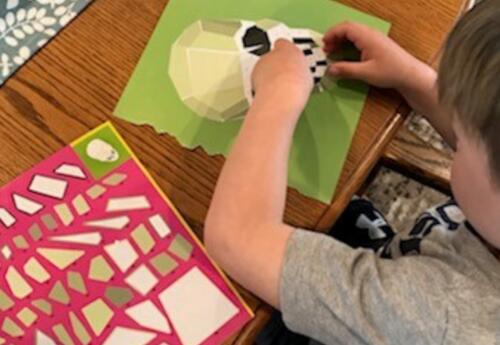 As someone who has had past experience coaching families through this kind of transition AND who now knows what it’s like to be on the other side, supporting the learning of multiple kids at home while I am also trying to work, I have some suggestions that might help others. Here are ten things families can do to help make this change as smooth as possible for you and your students: 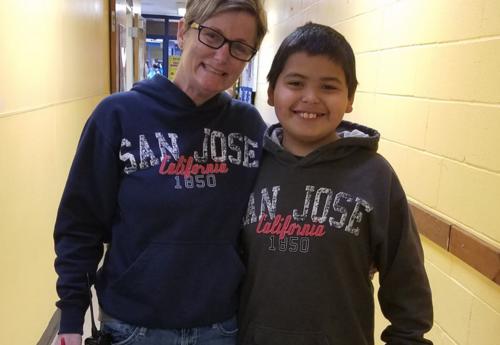 Paraeducators Go the Distance for Students: A Conversation with Michele Barmore

“What do I love most about my work?” muses Michele Barmore. “It’s that moment when a child realizes they can make choices that will improve the quality of their life. When they recognize their own power. When they take responsibility for their own behavior and learning. That’s what makes me most happy. I love helping kids find their own voices and discover their own potential.” 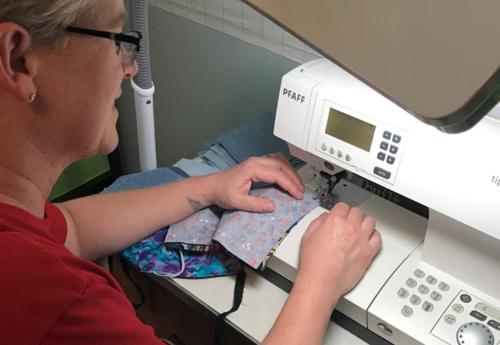 Ask any educator why they got into education, and within a minute, you’re likely to hear a story about how someone helped them at a time in their life when it mattered most – and how they want to give back in a meaningful way. When COVID-19 upended the world, an assortment of educators here in Ferndale, suddenly without students in classrooms, in cafeterias, or on playgrounds, found a different way to give back to their community. They decided to make cloth masks. Lots of them. 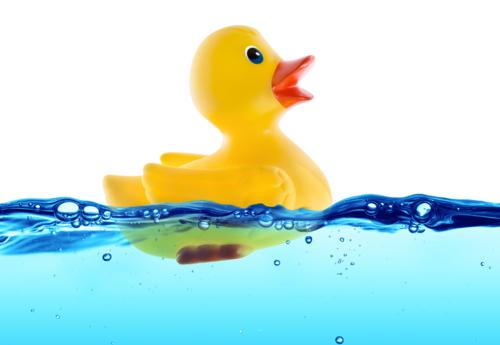 Special Guest Column by Horizon Principal Dr. Faye Britt The phrase “behind the scenes” speaks for itself; behind-the-scenes work can be likened to the movement of a duck on water. On the surface, it looks like the duck is just cruising around with not a care in the world, drifting from one place to another without really doing anything, but glance under the surface of the water and the duck’s legs are moving at the speed of a motor boat pulling a water skier in summer. That duck is working so hard to either fight the current or move from A to B. This is what schools have looked and felt like over the last few weeks.